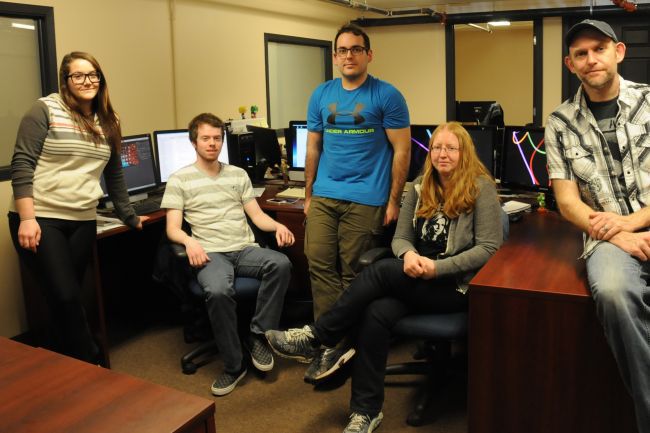 OK, so writing pirate talk is not as easy as it sounds. In case you missed that, Summerside video game company Funky Finger Productions Inc. is ready to release the newest pirate-themed addition to its lineup, “Rapscallions.”

Andy Roberts, director of product development at the studio, explained that the game is his small, but mighty, crew’s most ambitious project since the company was founded in 2012.

“This is the most adventurous game that we’ve done yet and we really want that to be our calling card. This is what a small team can do and this is what we’re capable of as a company,” said Roberts.

The game itself is akin to checkers, with the object being to send your pirate crew from your ship out onto a net grid connecting it to your opponent’s vessel. When two pirates encounter each other the aggressor knocks the defender off the grid. Whichever player completely decimates the other’s crew, wins. There are also various items and bonuses players can use to give their sprightly crew an advantage.

Users can play against an artificial intelligence, locally on the same device with a friend or over the Internet.

The game itself is free, but there are in-game, real money, purchases and advertisements.

Roberts called it a “spiritual successor” to an old Commodore 64 game called “Piracy.”

“Rapscallions” will appear on the Android store by the end of this week, while the iTunes version will appear, hopefully, sometime within the next couple of weeks.

Unfortunately, they can’t be more specific regarding release dates, said Roberts, because once the company submits the game to the distributor even they don’t know exactly when it will work its way through their system and be posted.

This will be Funky Finger’s third title, the others being “Ice Slyder” and “TyRunAsaurus.”

The company currently employs five people and operates out of the Holman Centre. As far as they know, they’re the only company developing video games in the Summerside area.

The fact that they exist might surprise some people, said Roberts, as the company tends to have a low profile. But they try to stay active in the Island’s small game-development community, which has about half a dozen members, take on students when able and generally trying to support the industry.

James Martin, one of the programmers, said he grew up wanting to work in the video game industry but always assumed he’d have to move away. However, an information technology expo he attended in Grade 10 surprised him with the amount of options he had locally.

He ended up being hired by Funky Finger right out of UPEI’s computer science/game programing program and moved to Summerside from Charlottetown.

“Rapscallions” will be the first game Martin has worked on with an actual studio and he’s proud of how it turned out.

“I’ve never released anything through a company yet, so it’s pretty exciting,” he said.

“There’s a lot of stuff that I’ve never done before that I’ve been able to do in this (game) that I think turned out well. So I’m excited for our future projects to be able to integrate that stuff and improve upon it.”