Aspin Kemp making waves in PEI and around the globe 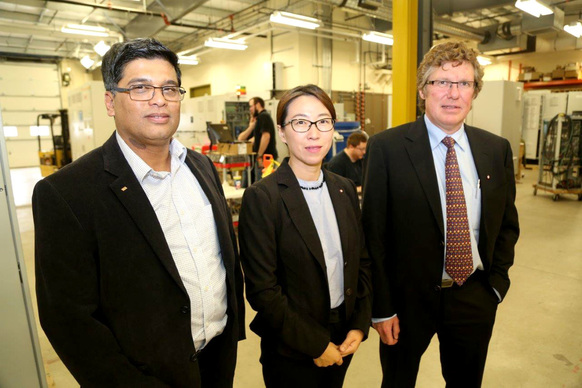 Aspin Kemp making waves in PEI and around the globe

A trade mission to India last February with the premier is paying off for Aspin Kemp CEO, Jason Aspin.

The engineering and manufacturing company, with corporate headquarters in PEI, provides power and control systems to marine and offshore industries. The company’s approach and innovation caught the attention of an Indian IT business they met.

Grintex India Limited, which specializes in ship design, homeland security, aerospace and space industry and air traffic control, was interested in a second meeting, so Aspin and his Finance Director Ravi Naidu travelled back to India in March.

The second meeting went so well that the two companies signed a memorandum of understanding witnessed by the premier during their third meeting just last week in the Aspin Kemp office in Stratford, PEI.

Premier Wade MacLauchlan made himself available on a moment’s notice to witness the deal.

“That just doesn’t happen anywhere else,” Aspin said. “The Province is very supportive that way.”

A small company like us is on the radar here. We can adjust and move fast as things change and PEI can too — it’s a good match for us.

Aspin Kemp employs more than 150 people from around the globe on Prince Edward Island and has locations in Singapore, Texas, Nova Scotia and Ontario. They’re rapidly expanding their reach and growing the business.

“Most of our business is in Asia,” says Aspin, whose wife Chunying Li, is an engineer and the company’s director of operations. The two met in Singapore and she agreed to make the move back to his Island home. The couple lives in Charlottetown with their two children.

This latest deal with Grintex is just another win for the successful company which relocated its headquarters to PEI three years ago.

I can hop a flight to Toronto and be anywhere in the world from here a lot easier than I could dealing with traffic in Hamilton.

Aspin, who grew up on a Pinette farm, said the prospects for doing big business from a small jurisdiction are many. “A small company like us is on the radar here. We can adjust and move fast as things change and PEI can too — it’s a good match for us.”

He and his staff appreciate the Island lifestyle, low cost of doing business and the ease to reach foreign markets.

“I can hop a flight to Toronto and be anywhere in the world from here a lot easier than I could dealing with traffic in Hamilton.

Government programs such as the labour rebate and provincial tax incentive for marine-based companies have been, and will be, their two biggest supports, he said.

“Innovation PEI has been really helpful to us. I want people to know the Island is open for business. It will offer you a lot more than expected. It has advantages over any place in Canada or the world. Companies thinking about setting up really need to take a look under the hood here in PEI,” he said.

“It has worked out well for us, and it’s great to prove all the naysayers wrong.”