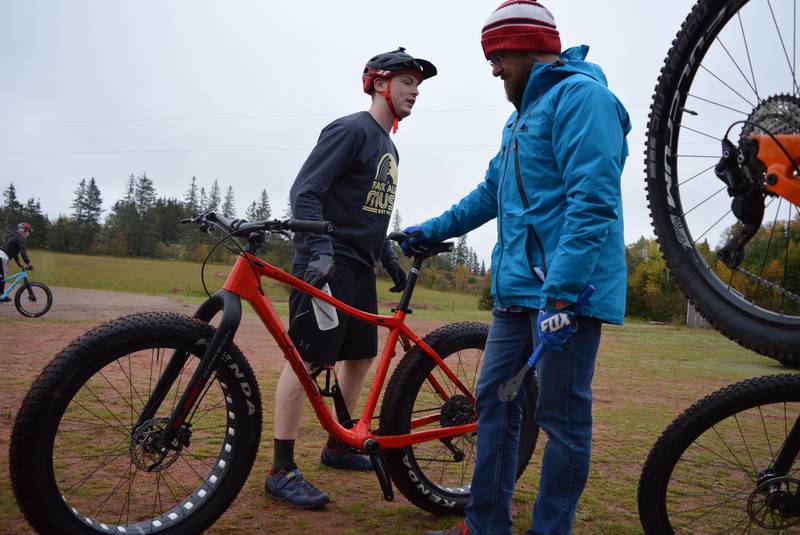 When Chris LeClair got into cycling in 2016, he was hooked. After spending the summer in the saddle, he tried the new winter trend – fat biking.

LeClair gave it a try and, like most who hop onto one, he enjoyed the fat bike experience. But he wished the bike was lighter.

“Let’s see if we can do a custom carbon,” he said. “It began as a hobby and a passion and it sort of turned into a business.”

And Quest Carbon Bikes was begun.

One year in, LeClair and mechanic Geoff Murray are under a tent at the Mark Arendz provincial park in Brookvale on Sunday. Several examples of LeClair’s dream come true are on display, on repair stands or out in the woods.

Even though the October day was overcast with a north wind to keep the air chilly, there was a line-up to try P.E.I.’s newest bike brand at the Quest demo day.

“Surprisingly competent for a rigid bike. Heaps of grip,” said Cheverie, after he hopped off a red Quest Tikaani.

Ian McGrath and Tammy Banfield were on the Island from Halifax for a day of mountain biking on Brookvale’s extensive trail system. McGrath was already a fan of his own fat bike, so Banfield took advantage of the demo to try a blue QUEST Saghari.

“It feels a lot like my bike. I’m surprised how maneuverable it was,” said Banfield.

“Everyone expects them to be like a monster truck,” said McGrath.

“It’s impressive how light they are considering how big they seem,” said Banfield.

One red Tikaani fat bike on demo had carbon wheels, disc brakes, studded tires and a Shimano Deore 1×10 drive train. Weighing in at 23 pounds, it sells for $2,999.

To date, LeClair has sold 10 bikes.

First, LeClair and business partner, Peter Wen, traveled to 10 factories in China to suss out the best supplier.

LeClair built up several prototypes and got feedback from local riders before settling on the best one.

Now, while frames are shipped from China, most of the components are purchased within Canada from Shimano, RaceFace and HLC.

Several Island workers and entrepreneurs are involved in the company so far. Two bike builders, a social media and marketing person, a designer and photographer have contributed to the Quest quest.

“The number of people who are coming off the road to try mountain biking and, increasingly, to try fat biking, it’s remarkable. P.E.I. is getting a reputation as a really, really popular destination. So, it kind of combines to make this a good launching pad.”