New engineering grads get the kinks out of potato farming 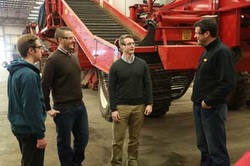 New engineering grads get the kinks out of potato farming

Inside Prince Edward Island’s sleek new engineering school, students are putting their heads together to save the spuds.

Members of at University of Prince Edward Island’s School of Sustainable Design Engineering’s first graduating class have come up with a brand new solution to an age old problem for the province’s primary industry – how to keep rocks out of potato bags.

Owner Trent Cousins, who was  named one of 21 young leaders for the 21st century by 21 Inc., has been working with the students on this critical piece of equipment that will keep rock-bruised potatoes out of bags where they rot and spoil the whole bunch. The marketplace is very competitive and “we wouldn’t want anybody else to get the edge that we might have,” says Cousins. Student Luke Bennett says his experience with his team at Allan Farm Equipment has been “just how learning to be an engineer should be.”

The 23 year-old Cape Bretoner says he has been calling friends at engineering school at Dal and UNB and telling them “you should have come here.”

What’s got him so jazzed is his third year project in this unique program model. It’s a real deal with a real PEI company where he and his team are helping solve a problem that has long plagued Island potato farmers.

“You wouldn’t believe the amount of interest we had from farmers on this,” he said.

Bennett says he is excited to get up and go to school every morning because he isn’t sitting in a classroom doing calculations, but heading to Covehead to put his book smarts into practice with an industry partner.

The new Engineering school’s broad-based curriculum is hands-on. This year will see the first full graduating class. Last year, UPEI expanded its two-year engineering program to four, meaning students can complete their degrees in the province without leaving for other universities. The students have been divided into three groups and are helping fix design problems for PEI potato, lobster and blueberry industries.

The provincial government committed $12 million for capital to the new School of Sustainable Design Engineering at UPEI with another $4 million for recruitment, operations, and start-up costs for a total of $16 million.