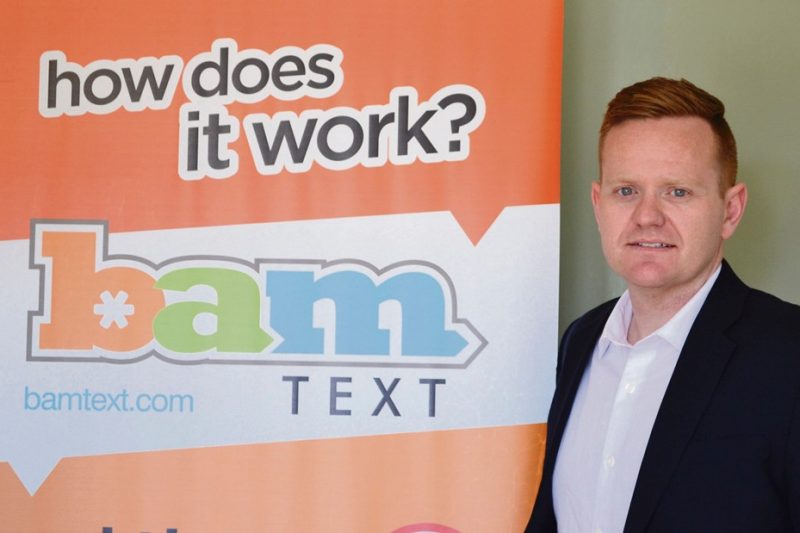 Jordan Fraser, founder of BamText, hopes to have one million people using his texting service by 2018.

is projecting to increase their yearly users by nearly 400,000 in just one year.

Our business is based around how people communicate, and texting is the

tool in the world Jordan Fraser

“Our business is based around how people communicate, and texting is the fastest growing

businesses across Canada and the United States, and sets up a feedback service, which allows

customers to text the store’s manager directly if they have a complaint while at there. BamText is

great for both the customers and the businesses, Fraser said. “It helps the customer get their problem

solved quickly. For businesses, it decreases the chances that the person is going to take to social media

and rant about their bad experience, which is something they don’t want to happen.”

Fraser had the idea for the company in 2013 after he had to wait for nearly half an hour, unattended,

at a sunglass store, before leaving in anger. “There had to be a way for me to let that manager know

about how bad my experience was there,” he said. Fraser searched for apps to do this, but didn’t

find any good ones. That’s when he thought of a texting service. He approached Keir Pollard, a

developer at the electronic company Fraser had been working at, with the idea. The two began

thinking about how this would work. “We knew it had to be free, simple and instant. The whole

idea is if I have a problem at a restaurant and text the manager, they get my complaint right

away and can do something about it.” After six weeks of development, BamText launched on

Feb. 12, 2014 and had its first client within two weeks. Since then, BamText has partnered

up with companies like A&W, Circle K, Pita Pit, as well as many small, local businesses

across Canada and the United States. They’ve increased their yearly users from 30,000

rapid success.  “We’re only six people who work at BamText, and over the past three years

roughly 500,000 people have used our system. It’s incredible.” Along with the customer

attending can vote for their favourite dish. BamText also introduced a service last year that

allows golfers on the course to text their food and drink orders to the manager, and have it

delivered it to them. Looking ahead, Fraser wants to have one million people using BamText

number of users BamText had last year, but if things keep going like this, I’m confident