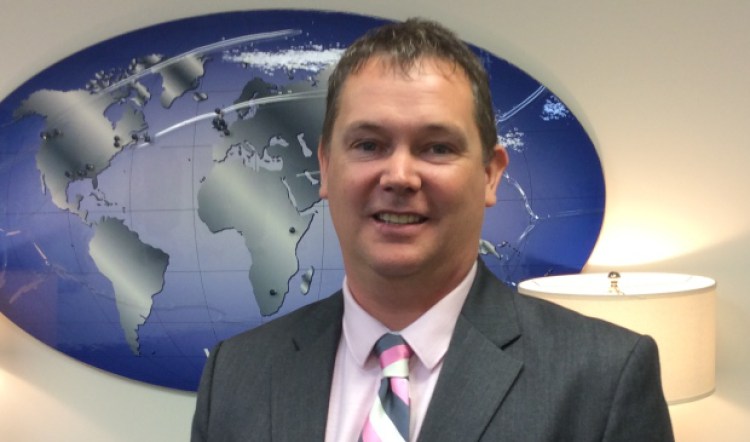 ‘Considering I grew up 15 minutes down the road, it’s almost like a dream come true’

Vector Atlantic president Jeff Poirier says they now work on as many engines in a week as in the first two years of the company’s time on P.E.I. (Nancy Russell/CBC)

Jeff Poirier embodies the Vector success story on Prince Edward Island. He started at the company in 1993, straight out of the Accounting Technology program at Holland College.

“There were 35 people here,” recalled Poirier.  “I was a green little kid sitting in the corner, 19 years old, and everyone was saying the business would never succeed, that we were only going to be here until the government money ran out.”

Vector, then known as Atlantic Turbines, was one of the first tenants at Slemon Park in 1991, starting with just four employees. The company specializes in the maintenance, repair and overhaul of gas turbine engines. Jazz and Pratt and Whitney Canada are among its biggest customers.

‘Considering I grew up 15 minutes down the road, in a little place called Grand River, it’s almost like a dream come true every day … I get to walk into this facility and see so many of my friends, my neighbours, cousins.’— Jeff Poirier

“Standing where I am today as the president of 475 people, touching as many engines in a week as we touched in the first two years with customers around the world, I think it’s safe to say we’re not here for a short time,” said Poirier, with a smile.

In 2015, the company also signed a long term lease with Slemon Park to stay at the facility to the end of 2030.

President Jeff Poirier started working at Vector at the age of 19, right after graduating from Holland College. (Nancy Russell/CBC)

Part of Vector’s success, according to Poirier, lies in its deep P.E.I. roots. More than 90 per cent of the employees are Islanders.

“Considering I grew up 15 minutes down the road, in a little place called Grand River, it’s almost like a dream come true every day,” explained Poirier.

“I get to walk into this facility and see so many of my friends, my neighbours, cousins. It gives you that extra drive to make sure you’re doing everything possible to make sure the business succeeds and to ensure there’s a long livelihood of careers in this facility.”

The company has attracted Islanders to return home with the promise of stable, year-round employment.

“That’s a core DNA for us to ensure we can employ many good Islanders,” observed Poirier.

Vector employees at Slemon Park have had lots of smile about this spring as the company announced a new 10-year contract extension with Jazz and opened a new engine test cell. (Nancy Russell/CBC)

Vector gets good reviews from its employees. In 2016, it was named one of the Best Places to Work in Atlantic Canada, earning the distinction for the second year in a row.

Clifford Gallant, originally from Miminegash, has been working at Vector for 15 years and has a brother who also works for the company. (Nancy Russell/CBC)

Clifford Gallant is supervisor of the inspection department and has been at Vector for 15 years. He’s originally from Miminegash and his brother also works for the company. Gallant joined Vector after completing the gas turbine technician program at Holland College.

“I thought it was a great opportunity for a career and sustainable employment,” said Gallant, adding that he would likely be working in fishing or farming if he hadn’t found aerospace.

Krista Lightbourne-Storr is a Holland College graduate originally from the Bahamas. She and her husband both work at Vector.

Krista Lightbourne-Storr works in sub-assembly. She and her husband are from the Bahamas, where Holland College does extensive recruiting. The couple did their on-the-job training at Vector and now have full-time jobs. They’re now recruiting friends and families to join them on Prince Edward Island.

“I have two persons who are going to take the course in September who I’ve recruited to come as well as there’s another Bahamian who will be joining shortly to the company,” said Lightbourne-Storr.

“So it’s definitely something I would love to spread around to the Bahamas.”

Rodney Barbour, who has been with the company since 1998, says he probably would have ended up going out West if it hadn’t been for Vector.

A 2015 consultant’s report prepared for the Aerospace and Defence Association of Prince Edward Island reported that P.E.I.’s aerospace workforce receives wages 22 per cent higher than the average P.E.I. worker.

“I think just having the security,” added Rodney Barbour, assembly operations supervisor, who has been with Vector since 1998.

The walls at Vector at Slemon Park feature the logos of airlines from around the world that they have worked with over the years. (Nancy Russell/CBC)

Many jurisdictions around the world offer tax incentives to aerospace companies. P.E.I. is the only one to offer a specific aerospace tax rebate, which Poirier calls “a critical piece.”

“We operate in seven different jurisdictions around the world and the tax holiday that we enjoy here from the provincial government is an added bonus,” said Poirier.

Vector executives also point to federal and government support for the company projects, such as the construction of a new facility for testing engines.

Dave Trainor set up Action Aero in Charlottetown with Vector as its primary customer and has now expanded world-wide. (Nancy Russell/CBC)

Islander Dave Trainor returned to P.E.I. in 2008 to set up Action Aero, based in a large hangar on Belmont Street in Charlottetown. Vector has remained their number one customer though they now do work for companies around the world.

“At that time, they [Vector] were sending most of their engine accessory work into various companies in the United States to get it repaired and overhauled and that was my background so I thought it would be a great fit for us to set up a company locally to support them,” explained Trainor, who now employs about 36 people.

Action Aero recruits employees through presentations at high schools in the Charlottetown area and offering co-op and on the job placements. (Nancy Russell/CBC)

Trainor set up Action Aero in Charlottetown instead of in the Summerside area in part because he didn’t want to compete with Vector for employees in the western end of the Island.

“When we opened up in 2008, very few people in Charlottetown or east, knew there was an aerospace industry,” said Trainor.

That lack of awareness posed a problem for Trainor, who started working with local high schools, giving presentations and offering tours. The company also welcomed students to come in as part of the co-op program.

“We’ve been able to fill our supply chain of future technicians through that program,” added Trainor.

Trainor suggests that the aerospace sector as a whole needs to do a better job of raising awareness of what it offers.

Action Aero has about 36 employees, most of them from the eastern end of Prince Edward Island because it doesn’t want to have to compete with Vector for workers. (Nancy Russell)