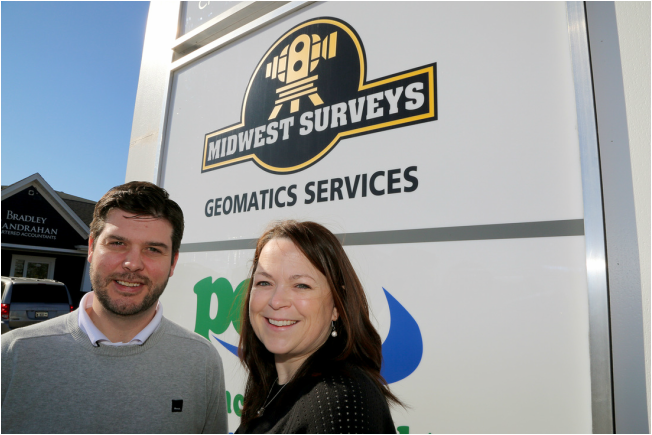 Jill and Brian Burridge were working for a Western Canadian company in Alberta when their first child was born and the magnetic pull of the red Island soil got stronger and stronger.

Jill (Cheverie) Burridge, a Holland College grad who got an engineering degree from UNB, wanted to be closer to her family in Souris and Brian, a New Brunswicker she met at university, was game to make the move too.

They had spent nine years working for Midwest Surveys as engineers offering survey work for oil and gas, private citizens and construction companies.

We decided it was time to get back home so we proposed this to our president.

In 2013 they made the move east and set up a satellite office in their Stratford home.

“We decided it was time to get back home so we proposed this to our president,” Jill Burridge said. “The big advantage the company saw was the three hour time difference.”

Now working on Island time, the Burridges would start the day at 7:00 am. Doing so gave the company a big head start on the competition in the west while everyone there was still sleeping at 4:00 a.m. In this way, Midwest Surveys could offer a quicker turnaround to beat its competitors.

Two years later, the Burridges were ready to expand and set up an office so they reached out to the Prince Edward Island government. Through the Launch Pad program, government helped them set up their office on the main strip in Stratford next to the vet clinic and offered wage subsidies to hire staff for the first year.

Officials from provincial government also visited their headquarters in Calgary, Alberta to discuss the satellite office in Stratford.

“Government’s support really attracted our company and the funding cemented the idea. They were really good and things  came together quickly.”

The expansion to PEI has gone well. One of the company’s office employees had been traveling to Fort Mac to work and spending most of his time away from his young son. He is now living and working at home on PEI.

“We are happy to get some of those guys home,” Jill said.

The Midwest Surveys office is equipped with Microsoft Link for daily conference calls from its Stratford boardroom to the Calgary one – after noon PEI time, of course, when Western colleagues arrive for work.

“Technology has made it all possible,” Mark said. “You can provide service from anywhere if you have the right setup.”