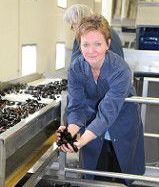 PEI is fortunate to have a vibrant and growing business community

“For the small population we have PEI does wonderful things, we must have more geniuses per capita than anywhere else. We need to do a better job of advertising all we can do.” – Esther Dockendorff, president of PEI Mussel King

Exporting around the world

Prince Edward Island is an exciting place to do business! Islanders like Dockendorff are helping PEI’s business community grow every day. PEI Mussel King is a family owned and operated business that has continuously operated since 1978. PEI Mussel King exports their product throughout the world to countries in Asia, the Middle East and across the USA. PEI Mussel King – proving that Island businesses continue to deliver highest quality products and services to the marketplace.

The soft-spoken Island entrepreneur and 2015 Exporter of the Year would rather be behind the scenes of her successful Mussel growing and shipping business in Morell, PEI. Unfortunately she has been getting a lot of requests lately to step forward and share the secrets to her family business’s huge success.

Business is booming for Mussel King, the Island business her late father Russell Dockendorff started in 1978. While Russell Dockendorff helped make PEI the largest producer of North America’s cultured mussels, Esther and her team took it a step further. Dockendorff, who remembers the first shipment of mussels that left the island for Calgary, her Dad getting the kids to help get the 180 kg shipment to the airport on time, and help stop a leaking container, is now overseeing the growing and shipping of the premium fresh and frozen Prince Edward Island Blue mussels in shell to far flung growing markets in the Persian Gulf, Japan, Europe, Israel, Egypt and China.

Their customers have grown, but so have their products. A key to their ongoing success is innovation and adaptability.

With the support of the provincial government, Mussel King has stepped from the low-margin commodity market to the production of more lucrative value-added products like “Mussels in Minutes.”
Dockendorff has some advice for aspiring Island entrepreneurs before you approach government with an idea – make sure it is well hatched and be prepared to work hard.

We approached government with our ideas and a solid business plan and we were very happy they supported us.”

When PEI businesses succeed, we all succeed