P.E.I. gets EzCity app that helps newcomers to the Island 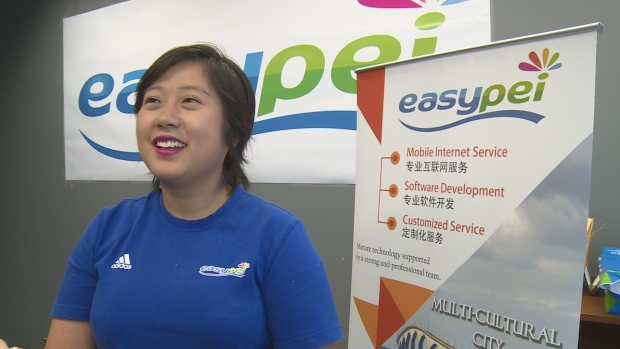 P.E.I. gets EzCity app that helps newcomers to the Island

Operations and Marketing Manager Peng Peng wishes the app was around when she immigrated. (Natalia Goodwin/CBC)

Newcomers to P.E.I. now have a new way to find what they need to help them get settled on the Island.

From government resources to restaurants, it can all be searched, in multiple languages, on the new app called EzCity.

The app launched in June and already has 700 users.

It was developed by software solutions company EasyPEI. The inspiration came to the owner, Edward Wang, when he was trying to set up his business, said EasyPEI’s operations and marketing manager Peng Peng.

“The language and cultural issue, it’s a barricade for us to set up business here even though he’s very experienced in running a business,” she said.

Peng said she experienced similar problems when she first arrived on P.E.I. to study. She made a lot of mistakes and said the goal of the app is to help newcomers avoid those mistakes and access the resources they need directly.

The app works like a search engine or yellow pages, users can search by category or keywords. The difference is this app operates with six different languages.

Peng explained that some words in other languages just don’t have a literal translation to English, which can make searching online difficult. But when a user can type in their own language, it makes finding things easier.

Users can search in multiple ways, including by category or keyword. (Natalia Goodwin/CBC)

The app is free for users and businesses. Businesses can also buy advertising and sign up for additional services, like promotions, for a fee.

Most of the app’s search results are still in English but the team is working on translations and on making the app better, said software developer Jason Xu.

Software developer Jason Xu continues to improve the app. Next he wants to add an event listing. ( Natalia Goodwin/CBC)

One way Xu wants to improve the app is by adding an events function to show newcomers what is happening in Charlottetown and on the Island.

When the app is more developed, EasyPEI hopes to take it to cities with even larger immigrant populations like Montreal and Toronto.